Following the success of the first Goût de France / Good France event, it will be held again on 21 March 2017, with a view to making it an annual spring event.

Goût de France / Good France, organized on the initiative of Alain Ducasse and the French ministry of Foreign affairs and international development, showcases the French way of life, regional products, and France as a tourist destination. Now more than ever, gastronomy is a key part of France’s appeal to tourists.

Inspired by Auguste Escoffier, who launched the “Dîners d’Épicure” (Epicurean Dinners) initiative in 1912 (the same menu, on the same day, in several world cities, for as many guests as possible), Goût de France / Good France recreates this wonderful idea by involving restaurants around the world.

Over 1,500 chefs worldwide will once again pay tribute to the excellence of French cuisine and its emphasis on sharing, by preparing a special menu of recipes inspired by French expertise. Participating restaurants are invited to design their menu based on the following sequence: aperitif and canapés, starter, main course(s), cheese, dessert(s), French wines and champagnes.

Each recipe will be based on cuisine that uses less fat, sugar and salt and shows concern for “good food” and the environment. The price is at the restaurant’s discretion and each participant will commit to donating 5% of the proceeds to a local NGO promoting health and the environment.

In addition to the participating restaurants, French embassies will also be taking part in the event, organizing dinners in the residences of Ambassadors.

From 28 January 2016, all participating restaurants are presented on the www.goodfrance.com website. All around the world, anyone can find participating restaurants in their city or country. Many chefs have already posted their menu on the Good France website, to enable everyone to imagine the dinner they will savour on 21 March. All that is left to do now is to contact the restaurant of your choosing to book a table. Given the number of restaurants that still hope to take part, registration will remain open until 22 February, and the committee of chefs will decide on this additional list.

Join us on 21 March 2017* in one of the 2,000 participating restaurants to sample the menus put together by the chefs and witness their expertise and creativity. 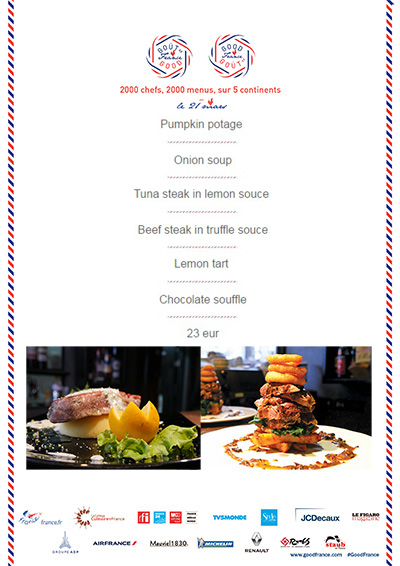